Trends in Mobile for 2016 (and How They Impact Your Sales)

We at Sales Force Europe are fortunate to work with some of the smartest technology companies in the world, many of them in the mobile and telco sector. And in our capacity as the European sales force for these companies, we have a prime view of the mobile trends bubbling to the surface – and specifically how those trends will impact global sales opportunities.

Here we have synthesized four important trends in mobile for 2016:

With so many eyeballs shifting from TV and desktop screens to mobile screens, everything from where entertainment and news is consumed to how enterprises roll out corporate software will be impacted. Location-based data can be over-laid on top of almost any service or software function to give it new meaning and capabilities. Everything from enterprise applications to video advertisements will have to be re-engineered to load quickly on 4G networks and re-designed to be interfaced via small screens and clumsy thumbs.

Selling these new mobile-optimized products and services will often involve mobile operators and Telco networks – and the resources and know-how to navigate their bureaucracies.

Another trend from 2015 that will become more manifest in 2016 is the shift of retail sales to mobile devices. Online retail sales has been growing faster than in-store retail sales for the past several years, and now the online sales are shifting from desktop to mobile devices. Ironically, shoppers are bringing their mobile devices back into the retail stores where they comparison shop, look up discount codes and promotions to apply, and even purchase in-store but have the items ship to their homes.

The largest growth in mobile commerce (m-commerce) is actually coming from other parts of the world outside of the United States. Europe, China and Latin America all lead the U.S. by a wide margin and comprise 63% of global m-commerce revenues. Europe alone counts 93 of Internet Retailers ‘Mobile 500’ merchants, and has contributed an estimated $25.66 Billion in m-commerce sales this year.

This trend is opening up huge sales opportunities for vendors of mobile hardware and software such as mobile Point-of-Sale (mPOS), NFC and other mobile payments technologies, in-store beacons and ad networks, text-based marketing and promotions software, etc. The UK, in particular, is way ahead of the United States and other countries in consumer adoption of these mobile retail and marketing technologies.

3) Internet of Things (IoT) Is A Mobile Sales Bonanza

The first web cam was deployed in 1993 to let grad students at the University of Cambridge monitor a coffee pot so as to avoid a wasted trip if the coffee was out. A year later the first WearCam was developed.

Two decades later, cheap WiFi chipsets and ubiquitous Internet connections are allowing everything to become IP-addressable. This trend, coupled with the advent of new and inexpensive sensors, has also propelled the wearables sector to new heights with everything from sleep monitors to sports clothing embedded with training sensors to GPS tags and wearable health monitors for pets.

The impact of IoT on mobile and Telco is that virtually every IoT device has a mobile app to go along with it. This trend yields sales opportunities for related mobile products and cloud services like cloud-based monitoring services for healthcare and sports, industrial sensors, and other applications

There are now 198 million active ad block users worldwide, according to PageFair. Ad blocking in the U.K. in particular grew 82% during 2015 to 12 million active users. Many of the major ad block developers like Adblock Plus offer mobile browser versions, and with Apple’s the release of iOS 9 — which actually includes APIs to allow content blockers to work with Safari — the move of ad blockers to mobile has accelerated. A start-up company called Shine recognized that mobile operators have a large incentive to keep bandwidth-hogging ads off of their network infrastructure, and introduced an ad-blocker that works at the network level. Asian mobile operator Digicel is a customer, and operators in the UK are exploring.

As with all shocks to an ecosystem, the impact will stimulate growth of new technologies and services, new ad formats, even new malvertising and the related security technologies to stop them — and new sales opportunities.

How These Trends Impact Your Sales

If any of the trends outlined here touch your business, you will likely be selling into a Telco or mobile carrier network. Since the Telco’s are service providers who operate on a subscription business model, now more than ever your sales approach must focus on revenue or cost savings, not on your technology.

Also, successful sales campaigns to Telco’s touch multiple departments, so having a sales person who is well connected to multiple contacts within the target company is essential. There are many complementary technologies within the Telco ecosystem, so if the ‘direct’ approach to the Telco is not delivering results, be creative and try working via partners who are already trusted and working with the Telco in your target country.

SFE has been selling into the Telco ecosystem since 2003 and we have 65+ seasoned sales professionals who are native in 27 countries and 14 languages.

Sales Outsourcing can give your company access to high-performance sales professionals with established buyer contacts, and can deliver a relatively quick boost to revenues. Much like selling through a channel, sales outsourcing can also help companies penetrate certain hard-to-reach vertical markets, or rapidly expand sales in new geographies like international markets. Sales Outsourcing is the fastest and lowest-risk way to grow revenues. 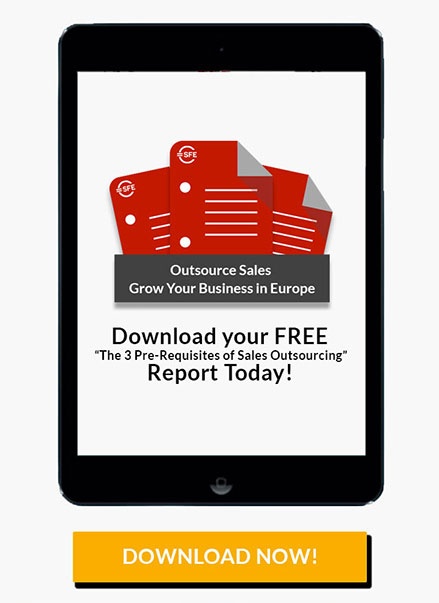